Amateur runner and director of parkrun Vernadsky Pavel Mishinev about the Berlin marathon 2016. Difficulties, emotions, impressions of a top marathon with tens of thousands of runners from around the world on the world record track.

I’ve been running for about two years, during this time I ran 4 marathons (Berlin was my 4th marathon), about two dozen half marathons and a number of shorter distances. I run for myself and for health, I like to run in any weather – both in winter and in summer.

I like to travel, so I often try to go somewhere and combine the race with visiting interesting cities (there is even such a term – running tourism). I believe that running – as a sport that is accessible to everyone – unites people and brings great benefits. I’m the director of Vernadsky’s parkran (a series of free runs for 5 km every Saturday) in one of the most beautiful parks in Moscow – the park of the 50th anniversary of October.

The Berlin marathon is one of the six most famous and prestigious marathons in the world (the so-called Majors series – Tokyo, Berlin, London, New York, Boston, Chicago), for residents of Russia it is the most affordable in terms of location and registration for it – since For example, you cannot register for Boston without having a good result at previous marathons (for my age, this is faster than 02:50:00).

The main idea was to get to a major European race. Registration for them opens (and closes) a year before the race, so when I made a plan for 2016 in October 2015, I saw that this year it is very convenient to run a marathon in Berlin this fall.

Registration usually begins about a month after the end of the previous marathon and lasts 2 weeks. . The site works in two languages ​​- English and German. There are five ways to get to the marathon itself

Having bought a guaranteed tour or making money for charity.
Be a fast runner (up to 45 years old, 02:45:00, the rest 02:55:00).
An additional 1000 lots to those who donate an additional amount to the registration amount.
To members of the anniversary club (participants to 10 or more Berlin marathons).
So in October 2015 I applied for participation in the lottery for the 2016 marathon.

The draw took place on December 1st, and, to my disappointment and surprise, I did not receive the cherished ticket. However, many of my friends in this lottery won. In a letter from the organizers.

I saw that it’s still possible to get to the marathon – they give out an additional 1000 places for those who are willing to donate a small amount of money to charity. In this case, you must go to a site at a certain point in time – December 7th at 10:00 CET – and be one of the first 1000. At the appointed time, I was already ready to register – all the data for filling out the questionnaires I previously “drove” into the notebook file (so as not to waste input time and reduce the registration time).

Thus, by 10:00, when the additional registration button appeared on the marathon’s website, I was already ready, and the procedure took me about 30 seconds. I quickly copied all the data and clicked “send”. The site “digested” the information for a while, and then it appeared that I did not have 2 checkboxes and without them there was no way to complete the registration.

Search and installation of checkmarks took another 20 seconds – and again I clicked “send”. The site again began to “digest” my data and eventually fell off by timeout. It became clear that the number of people who want to register is much greater than the site can withstand, it is the most affordable in terms of location and registration for it in an idle state for 40 minutes.

At that time, I realized that I practically had no chance to get one of the coveted 1000 slots for Berlin, but I decided to try and wrote in technical support. One evening, technical support replied that they, too, did not expect such an effect among registrants, the site could not stand it, they apologize and … as an exception, they are ready to give me a slot. I had no words … it was luck and I was happy.

In January 2016, a letter came from the organizers describing the registration procedure. Unlike the lottery, they pay almost 3 months for payment and registration. 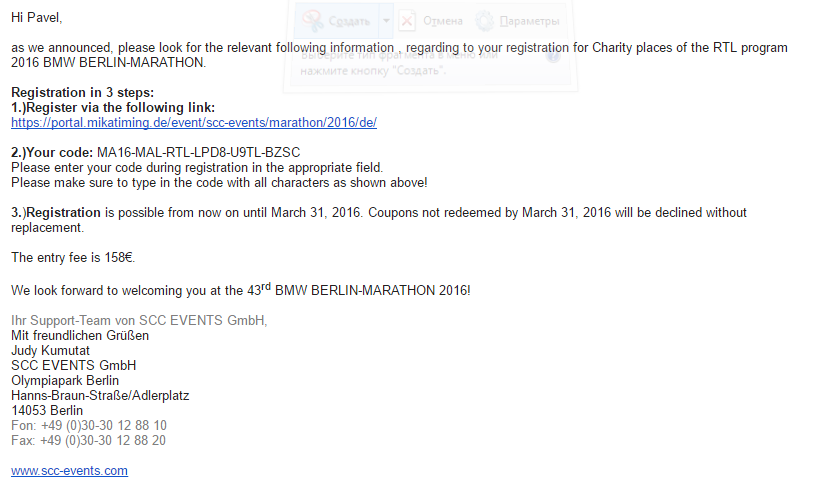 The letter shows the cost of the marathon – 158 euros – the price consists of 2 parts, 108 euros registration itself + 50 euros charity fee. For those who won the lottery, the price, respectively, was 50 euros lower. Unlike other races, the starter kit does not include a t-shirt – you must buy it separately – the cost is 20 euros. I’ll say in advance that you don’t have to rush to buy a T-shirt – it can be taken to the expo for the same price, but there you can measure it, and you may not like it.

1. BMW Berlin Marathon is traditionally held on the last Saturday and Sunday of September, but exceptions are possible. Like, for example, this year. The marathon will be held two weeks earlier due to the fact that German Unity Day will be celebrated in Berlin on October 3, and preparation for this event takes time.

3. Since 2008, the Berlin Marathon has been awarded gold status according to the IAAF classification. In addition, he is included in the World Marathon Majors – the six most prestigious marathons in the world. Other members of WMM are marathons in London, Boston, New York, Chicago and Tokyo.

4. This year, about 70,000 people from 133 countries registered for the events of the Berlin Marathon. In addition to 44 389 runners, these are scooters, handbikers and wheelchairs. On Saturday, a mini-marathon for children will take place, in which about 10,000 participants are expected.

5. The organization of the marathon involves 6,000 volunteers, more than 1,000 police officers and 650 paramedics. If someone becomes ill, help will be rendered to him no later than in 8 minutes.

6. Berlin marathon – a cost-effective event. Its broadcast is watched in 150 countries of the world, in Berlin itself, many visiting participants stay for several nights.

7. There are many more people who want to run the Berlin Marathon annually than the places provided by the organizers. Therefore, slots are played in the lottery. To participate in it, after the registration is opened, you must fill out a form on the site and wait for an answer. You can also become a participant if you are a fast runner, or you collect money for charity, or you bought a package of a tour operator from the list of organizers.

8. Fast runners are those who, over the past two years, have participated in AIMS-certified marathons and have completed the qualification standard. For example, men under 44 years old need to run out from 2:45, women – from 3:00. Such athletes are guaranteed participation in the Berlin Marathon.

9. Although Berlin is the most budgetary of the majors (registration cost for runners is 125.00 €), almost everything has to be paid. In addition to the entry fee, this is a chip rental, a finisher t-shirt, and official photos and videos. If you wish, you can spend a lot of money on the Expo (three hangars and part of the airfield of the former Tempelhof airport), where the leading representatives of equipment, food, etc. are represented. Here, starter packs are issued, which you can pick up only in person.

10. Participants start in blocks, depending on the results of their previous marathons. First, the elite, the last – newcomers. Sunday is just the main start. On Saturday, a marathon of scooters and children’s races. Also on Saturday, Breakfast Run is held – a free 6-kilometer race for everyone.

11. The route of the Berlin Marathon is a vicious circle through the streets of six districts of the city with a start and finish near the Brandenburg Gate. The line of the optimal trajectory of motion is plotted on the asphalt with a blue dotted line. Time Limit: 6:15.

12. The route of the Berlin marathon is almost flat, asphalt. She is the fastest in the world in the average time of the first ten runners, and in the number of world records. In total, there were 7, 6 – the last ones in Berlin.

13. The IAAF Records Women’s World Records Two. The first is held in the mixed gender category, that is, with the participation of male pacemakers. It was installed in 2003 in London by Paula Radcliffe – 2:15:25. Since April 2017, the world record “only women” belongs to Mary Caitani, who also won the London Marathon – 2:17:01. In Berlin, women’s world records were set, but for quite some time. The last time was Japanese Naoko Takahashi in 2001 (2:19:46).

15. The assault on the world record was also expected in 2017, when the great Eliud Kipchoge, Wilson Kipsang and Kenenisa Bekele met at a distance, but were unlucky with the weather. On the wet track from the rain, Kipchoge confirmed that at the moment he was the best marathon runner in the world, but he had a record. The Kenyan result is 2:03:32. This is his eighth victory in nine marathons in which he participated. The second place went to Guiye Adola from Ethiopia. His time is 2:03:46 – the fastest for a debutant at a marathon. The Ethiopian Mosinet Jeremey became the third (2:06:09). Kipsang and Bekele could not finish.

18. This year, the elite list is again headed by Eliud Kipchoge (personal record – 2:03:05, London-2016), which means that an attempt to break the world record will take place again. Kipsang is also about to run (2:03:13, Berlin 2016). Another star of the current marathon is the five-time world champion in half marathon and the holder of the world record at this distance, Eritrean Zersenai Tadese (2:10:41, London 2012).

19. In the women’s race intends to defend the title Gladys Cherono. Her main rival is the Ethiopian Tirunesh Dibaba. Three-time Olympic champion, two-time world champion in 2017 set a personal record in London (2:17:56). In the list of the fastest women in the marathon, she is the third. In addition to Cherono and Dibaba, there will be three more women with personal records faster than 2:20.

20. Weather is a key factor that can prevent athletes from showing everything they can do. According to the long-term forecast of weather forecasters, on September 16 it will be dry in Berlin, the air temperature will be up to 22 degrees, but in the morning when the elite runs, it will be cooler.